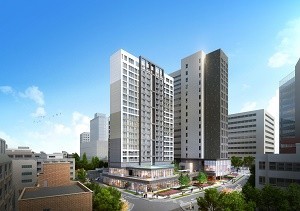 Koh Brothers Group’s first development in South Korea, Nonhyeon I’PARK, has received robust interest, with 96 percent of the project sold within three months of its launch.

In fact, the mixed-use development sold 75 percent of its units during the first seven days of its launch in March, said Koh Brothers managing director and Group CEO Francis Koh.

Nonhyeon I’PARK is strategically situated in Gangnam, near the core business districts of COEX and Teheran-ro.

“Considering the current market upcycle and favourable response received so far, we are confident to sell the remaining 14 units by Q3 2018 and will continue to push sales until we are sold out,” said Koh.

“We see promising prospects for us as lifestyle-themed developers in South Korea and are excited to explore further opportunities in this market where we can continue to redefine living for consumers, thereby maximising the yield of our properties.”

Redevelopment started in the second quarter of the year and is set to be completed by 2020.

Koh Brothers expects the project to positively contribute to the group’s financial performance for the financial year ending 31 December.